4 Worst Things You Can Do with Clutter

4 Worst Things You Can Do with Clutter

No matter how much you pride yourself on your organisational skills and your ability to keep your home neat and tidy at all times, know that no one is immune to clutter. For example, let’s say that you just came back from your summer vacation. You probably have a pile of newspapers and magazines you are yet to go through and which you are likely to sit in the middle of your living room at least for the next few days. In most of the cases, however, clutter is not the problem. The actual problem is the way we deal with clutter. Some people have adopted a very poor strategy when it comes to that and instead of getting rid of the all the mess they:

Whatever you do, do not get attached to clutter. The second that happens, you will be one step closer to becoming a hoarder. Don’t nurture sentimental feelings towards junk and simply toss all the mess away. Try to adopt a minimalistic way of thinking and get rid of all the things you do not need or use. That will not only free up more space in your home but it may even help you make some money if you manage to sell your unwanted items.

Let it pile up 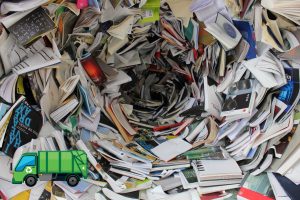 One of the most common reasons why people decide to use a comprehensive house clearance service in London is that they have allowed for the clutter to accumulate over a very long period of time. Don’t make that mistake. Even if there is just one piece of junk in your house, throw it away now. Clutter has the incredible power to attract more clutter. So, before you know it, this one piece of junk can turn into a giant pile of rubbish. To forge this habit, you can use a simple anti-procrastination strategy – if a task will take you less than 2 minutes to do it, do it now instead of leaving it for later.

There are different researches which claim that clutter is a sign of genius. Even Freud had similar views since he believed that the lack of clutter in one’s home means that the person has a cluttered and chaotic mind. Even if that is true, the fact remains that clutter will always be aesthetically unappealing. Plus, it acts like a big magnet for pests. So, instead of acting like a genius, make an effort and just tidy up.

Try to hide it

We have all done it. Some of your friends show up at your door out of the blue and you try to hide the dirty dishes in the oven or cover your unmade bed under a thick blanket. That, however, is only a temporary solution. Even if you are very good at hiding your clutter, at some point this trick will stop working for you.