City waste management is a problem all over the world and the United Kingdom makes no exception to that negative tendency. The country’s recycling rates are low, littering and fly tipping continue to be a problem and the rapidly increasing population of the UK capital means that the annual waste production in the city is constantly increasing. Some of the more recent statistics, studies and researches on the topic also show that:

These numbers are shocking but the details behind them are even more disturbing.

Annual waste produced by Londoners weights as much as 25,000 whales

Currently, the population of the English capital produces approximately 3.7 million tonnes of rubbish per year. Given that an average adult blue whale, a.k.a. the largest and heaviest animal on the planet weighs 150 tonnes, this means that per year we throw away almost 25,000 whales so to say. That is enough to fill 1,500 Olympic swimming pools to the brim. Experts believe that this tendency will remain strong and that in the next few years, London’s junk production rates will increase by about 1 tonne per year.

Nearly one-fifth of all that rubbish ends up in landfills

More than 750,000 tonnes of the capital’s rubbish produced in a year is never reused, recycled, incinerated, composted or processed in any other way. It is simply tossed in landfills.

Recycling rates in London are lower than the country’s average

The United Kingdom recycles nearly 45% of the junk produced on its territory every year. Out of its four constituent countries, Wales is the hands-down winner in the recycling game with its impressive 52.2%. And where does London stand here? Under 33%! Some boroughs in the capital have an annual recycling rate of less than 20%. Such is the case with Newham (14%), Lewisham (18%) and Westminster (17%).

Believe it or not but your household alone is responsible for about 970 kg of London’s average waste. That is more than the weight of an elephant or even a small plane.

While we are on the topic of elephants and waste, the biggest sewage blockage in London’s history weighted as much as 17 elephants. It was so big that it even received a name of its own – “Fatberg.” Today, dry pieces of it can be seen in the Museum of London. 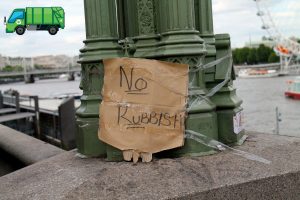 The only good junk-related news is that the quality of professional rubbish removal services in the city is on the rise and so is the number of licensed businesses operating in this sector. Therefore, finding a comprehensive junk removal service in London is now easier than ever. So, the next time you need to dispose of a large number of unwanted items or a bulky old piece of furniture, call in the pros. In that way, your waste will be properly and safely disposed of and you will make a much-needed contribution to a cleaner and greener London. Be part of the solution and not of the problem.