Illegal dumping of junk and rubbish on public and private land in the UK costs a total of hundred million pounds every year. 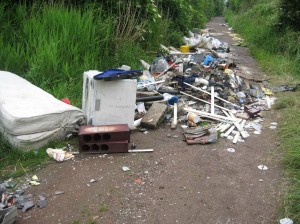 The cost is shared between local councils and private land owners who have both suffered from fly tipping – the term used to describe this appalling practice. There are many companies, watchdog organisations, activist and conservation groups which are furious about this, especially if only half a percent of all recorded fly tipping cases, ever make it to court.

Rubbish removal companies are also suffering from illegal fly tippers as it seems they cannot provide customers with the right type of service, or can they? Blaming rubbish removal companies in London and the surrounding counties for such incidents is wrong and groundless, simply because they have a proper working service, which is used by many legit customers. However, fly dumping accidents are caused by people who choose to disregard regulations and break laws all in the name of not paying a small fee to have their rubbish removed by a specialised service provider.

A recent report compiled by order of one of London’s most renowned rubbish removals companies has been a real eye opener for many local councils. In turns out that local councils should also take some of the blame for fly dumping because bulky waste collection and management is insufficient in some parts of the country.

More so, the costs of using recycling plants, compacting depots, incinerators, purifiers and landfills as a last resort, are quite high for natural persons – which may be another reason why fly tipping is such a big problem.

The report also suggested that such counties should make their domestic rubbish clearances and collection services more frequent. The scope of waste materials collected from households and business should also be expanded, as this way a local council will have more control over waste being disposed of, and ensure this is done properly. the fly dumping report suggests that councils which have managed to curb the problem or keep it at bay should compile a list of best practices and recommendations on how to deal with the problem effectively.

Public awareness is perhaps the most powerful weapon in this case. It is highly doubtful that local residents will be happy to have fifty million pounds of their tax money spend on cleaning someone else’s rubbish, which on top of all was dumped illegally.